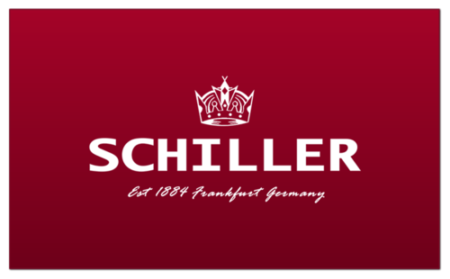 orn 1860 in Berlin, Germany, Gustav Johann Schiller, son of a furniture maker, was raised in a large family of 8 children. At a young age, Gustav distinctively stood out among his siblings, like an orator has a natural choice of words. Gustav had a faculty with mechanics and tools and at the age of 15 joined his father’s furniture company, quickly rising from Apprentice to top Master Maker. Among Gustav’s hobbies was listening to music, the love for music followed him with a passion. His father seeing this love supported the idea of his son developing this further and at the age of 19, Gustav’s father sent him around Germany and eventually Gustav joined some of the well established piano makes Breiktkopf and Hartel in the city of Leipzig. In 1885, Gustav went back to Berlin and crafted his first two table pianos. Over a very short career, Gustav developed instruments that were superior in sound and mechanics to any piano of that day.

Friedrich, one of Gustav’s sons, took over the Schiller Company in about 1910 after Gustav passed away. Friedrich was a marketing genius and quickly took fortune in the company’s solid reputation by traveling and expanding the distribution of pianos worldwide. By the 20’s, however, the economic crisis and invention of the gramophone limited the demand for pianos. Friedrich, however, did not let the situation get him down; capitalizing on the trend with a small upright piano that quickly became popular with smaller budgets and downsized living quarters. This piano solidified Schiller way ahead of the competition. No one, however, could have foreseen the devastating effects of World War II. The Schiller factory had been totally destroyed by the end of the war. Schiller redefined its business model at this time with instrument engineering and rebuilding work.

We honor the Schiller name with Schiller Musical Instruments. Made with a pioneering spirit and hands on approach that is of the highest quality, yet affordable to all musicians. Enjoyed by players in countries all around the world.